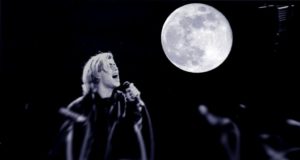 The action happens in a small village near the mountain. The inhabitants are ‘carbonero’, making their living with the production of wood coal.

Scene 1: The sting of a bee and the waist of a wasp

The ballroom of the hotel “La Pierre en l’Air”. Rudi. a pop singer, dances on stage. Pola. a young lady. admires him. Seduction.. She takes Rudi to the first floor. Another customer, Bademeister Mario, is making a lot of noise.

Pola and Rudi get married.

Monsieur Woodbury, Director and his secretary Yvette are happy. Rudi’s record ‘Du isst my paradiss’ is a world hit.

One year later, in the Alpe della Luna, a small village. Pola, Rudi and their newborn daughter Lili, enjoy a quiet and happy life. Sudden obsession of Rudi to Pola ‘Was I your first man on our wedding night ?’

Act 2: The woman with glasses

Scene 1: I want to have you

Close to them lives Tudu, the woman with glasses. She is desperately in love with Bademeister Mario. She is unfortunately addict to the Chimic Bonus, swallowing tablets all the time.

Scène 2: The concert in the Alpe

A large crowd attends Rudi’s concert. Tudu however manages to get an autograph from him.

Tudu brings Rudi home. She puts him her glasses..Their night…

Pola and Rudi celebrate their wedding anniversary. Rudi falls asleep and dreams of a flying deer which takes him in the air. Telephone ! It’s Tudu. Rudi cannot hide his trouble. Pola is getting suspicious. She unfortunately wounds herself with an infected nail! Rudi does not care, and leaves her to meet Tudu: ‘A rehearsal’he lies.

Rudi rehearses with his musicians. He prepares his new tune ‘Love is a battle’ on the Karo-Machine, a device he uses for composing. Anxious. He throws the musicians out. At last comes Tudu, unfortunately accompanied by Bademeister Mario. Rudi tries nevertheless to kiss her . ‘ You stick’ says Tudu In the meantime, Bademeister Mario is having too deep an interrest in the composing machine.

Act 3: Throwing the stone in the air

Scène 2: You better give everything to the poor

Rudi tries desperately to get Tudu on the phone. An unknown man answers…

The infection has spread out from Pola’s arm to the whole body. The Dottore and the nurse Schwester Catherine do warn Rudi of the seriousness of the disease. Rudi does not care. Instead, he tries to convince Pola to take him back. Extremely weak, Pola refuses. Rudi then leaves. Left alone, Pola dies sadly…

Scene 4: In the Pierre en l’Air

Tudu is having fun with her friends Filip, Paul and Gesine. Taken by jealousy, Rudi forces Tudu to follow him. But she does not want him anymore.

Act 4 : The Summit was just before

Rudi has caught an infamous disease. The Dottore and Schwester – Catherine do torment him.

Mr Woodbury offers a banquet for Bademeister Mario and his 5 million pieces of ‘Alpe della Luna’ sold. Rudi insists on singing ‘Love is a battle’, only to meet the coldest indifference. Extremely disappointed, he starts to drink and takes too much of the Chimic Bonus.

Bademeister Mario insults him and informs him abruptly of the death of Pola. Rudi loses his mind. Afraid by the assistance, he takes his daughter Lili in his arms and jumps through the window.

In the writing, Rudi, the ‘pop’ singer has a score of an ‘uneducated’ voice, using un-classical melodies, out of range notes, high falsetti and so on, as opposed to the classical and powerful character of the educated tenor and baryton.

During the writing. the composer had in mind, a young singer Bernard Plouvier, belonging to the edge ‘pop’ group Ninove. who was fully educated as a violinist but not as a singer. He was therefore able to master his part with a ‘harsh’ voice, in other words, without the technique of the opera tenor.

The orchestra is composed of three groups: the Arkestra Kult; the Choro Primo and the Sinfonico.

On stage the orchestra are the Arkestra Kult; Rudi’s group, and the Choro Primo, the choir.